There was a moment in Bali, sitting in front of a Hindu priest, when I learned the horror of being being told who and what I was. It was the second day of my visit on the island, and Pak Bedot, knowing my keenness for local wisdom, and perhaps hoping to learn a little more about his guest, took me to his cousin for an astrology reading.

Pak Bedot’s cousin lived in the village just outside Tampaksiring. He was a year or so into official priesthood, and had just moved into a new compound where he could host ceremonial gatherings. My host family owed him congratulations. We entered the compound with a basket-full of fruit and aromatic rice.

Amidst the house’s ongoing construction, at the center of the compound, was an elevated pagoda with a floor of bleached tile. On a cushion sat Pak Bedot’s cousin, bun tied high on his head, clothing loose and white.

What do you want to know, he asked. He looked bored. I figured Pak Bedot had called telling him a foreigner was looking for a show. When I told him I wanted to learn about his supernatural tap-ins, he pulled out a clean, laminated book he said was full of wisdom from Bali’s ancient Hindu sages. He lifted up four fingers “I can’t see ghosts or raise the dead, but I can read you based on your birthday.”

I told him the day, month, and year I was born. He spread the book, pointed to one spot on a page. The plastic cover crackled as the binding stretched. “Here,” he said, “You’re faithful.” “Loyal. You’re articulate with words.”

Pak Bedot, who lay on his side, nodded his head and muttered “mmmmmmm”. Pak Bedot’s wife, who made pointed efforts to prove she wasn’t interested in her husband’s bookish friends, particularly those of the female variety, sat looking away from us towards the pot of fried pig in the kitchen, tugging at her kabaya so it wouldn’t rise on her belly. The priest’s wife sat in the shade of another pagoda weaving baskets for a festival that would come next month.

The priest flipped toward the back of the book. He looked at me, almost reprimandingly. “You’re not frugal. When you give things away, you often regret it, and you like to wear things directly after you buy them.”

I listened on. This didn’t ring true (at least not after two years of living simply), and I thought back to all the bogus astrological projections I used to read in teen magazines. But surely ancient formulas held more merit? I was willing to believe.

Perhaps that willingness proved a mistake. The next and last reading profoundly unsettled me.

“Not smart, to the point where it frustrates you.” The word he used for smart is “pintar”, used also for “skilled” or “adept.”

The silence that followed bit my consciousness where I sat. I hugged the solemnity to myself and hid it behind closed features.

“So you are good and loyal,” said Pak Bedot to me, content now at welcoming this sort of stranger into his home.

In Indonesia, kindness and contribution towards others stood paramount over prideful attributes such as exceptionalism, intelligence, and renown. To most locals my astrological reading was a testament of good character, but for me it was a condemnation.

“Not smart to the point where it frustrates you. What does this mean?” I asked the priest.

Pak Bedot jumped in. He said it means that you are good at advising and writing, but better behind the scenes than as a figurehead.

It’s been over 1.5 years and that prophecy still haunts me. After taking the GRE twice with mediocre results, I wonder what path there is for cultural observers, for seekers, who stray outside conventional pursuits of wisdom.

So who is more merited to judge my potential, the ancient Balinese sages or the standardized testing panel? Or maybe they’re in collusion with one another?

As I write I’m sitting in Andahuaylas, Peru. Outside is a dusty urbanscape that sits in a valley in the Andes. I’m here on a stop between Ayacucho to Cusco. Upon arriving in Cusco I may or may not be welcomed by a local who has agreed to take me out to experience night life. This is contingent upon whether or not I’ll be able to reach him on a data-less phone.

Rewind several hours and I was being thrown side-to-side on a minibus whisking up clean roads that had been blasted and paved into the mountains. Rewind a day and I was touching woven textile in an artisan’s market.

The day before that I was inside a church adorned with holy figurines. Jesus on the wall looked pensive. Jesus on the steps towards the altar was being washed by a man who declared himself a religious anthropologist. “Peruvian culture is very rich!” he told me. Just then a traditionally-dressed old woman, who had been kneeling by a statue of the virgin Mary, emerged from prayer and paced towards me. She opened her arms. It happened so quickly. Before I knew it I was inside her embrace. I could feel her hands on my back. She kissed me on both cheeks, smiled and chuckled before she walked away.

I came here alone because when I get lost, beautiful things happen. The only intelligence necessary comes in adapting to the moment, and to puzzling my way to where I need to be.

As for where I need to go, that is, and perhaps always will be, unclear.

Above: The anthropologist and his family washing Jesus for the upcoming evening mass. Inglesia de San Francisco, Ayacusco. 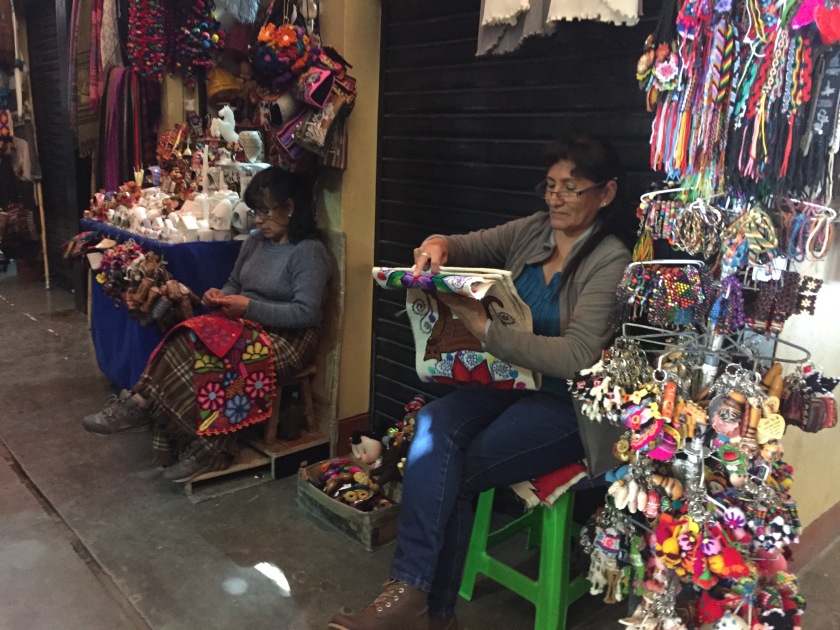 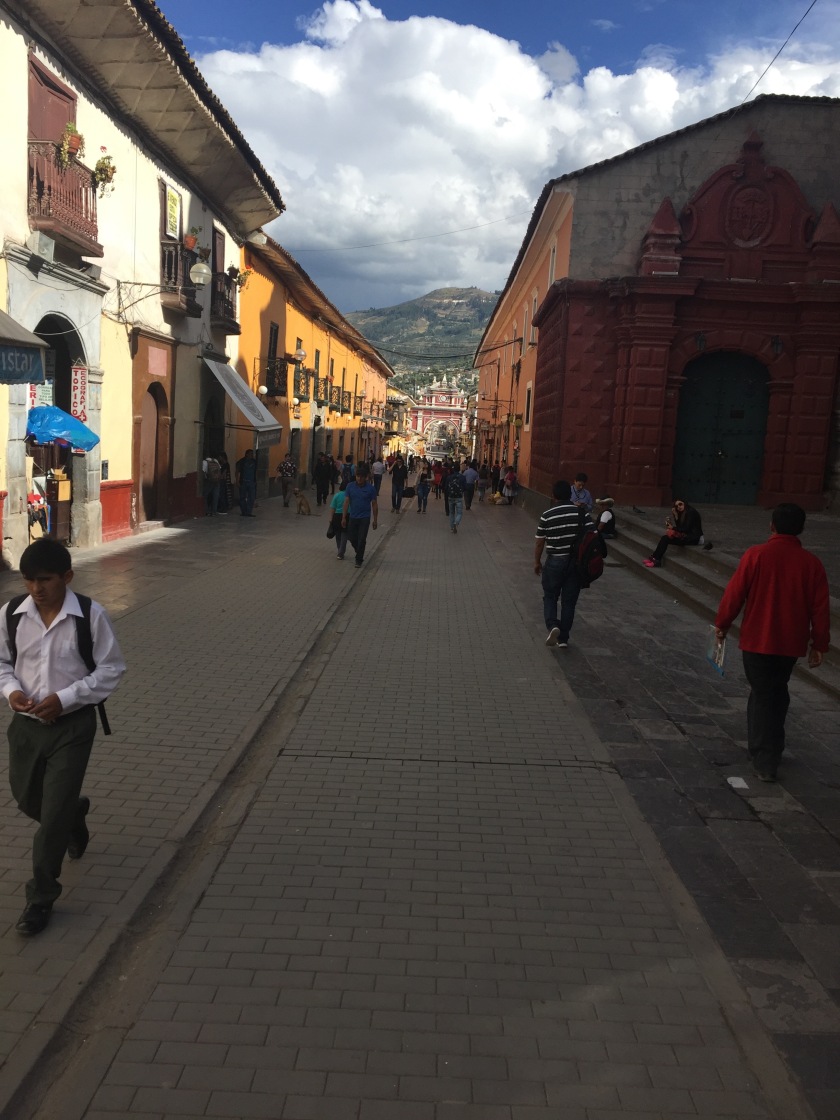 The route towards Santa Ana Market in Ayacucho.

3 thoughts on “Curiosity #79: Prophecies of Potential”