(Apologies for the following disturbing images)

I traveled into the mountains, where I had been invited to witness the ritual celebration of the local deities. My host was Priest Menu Acheampong, a thin man in his sixties who communicated with witch-catching spirits of the region.

Priest Acheampong’s shrine was located in the small village of Atwea. While Atwea’s natural surroundings were beautiful, the village itself looked damaged and bleak: partially chewed off by time and weather. The shrine itself stood on a stretch of land that descended into a river, which hosted a powerful deity called Kofi. The other witch-catching spirits rested in unidentifiable black pods on an offering table by the river, where Priest Acheampong stood with his knife. By the time I arrived in the village, the spirits were ravenous.

To begin the feast, Priest Acheampong sliced open the neck of a chicken and launched it into the air. The animal landed on its stomach: a sign of the spirits’ rejection. The priest rang a high-pitched bell as the chicken’s chest shuddered to a stop, and he whispered words of consolation to the disappointed spirits: more animals would quell their hunger. These animals waited around the worship area, chained to the ground and to the trees.

While alive, its feathers were plucked and scattered over the deities on the offering table. Blood from its neck was enough to go around. After being thrown to the ground, the bird flapped weakly on its side, dying to the sound of spiritual incantations.

The second guinea fowl maintained a dignified calm as it was carried to the offering table. Its feathers were black and white, like art-deco tile, and its neck arched like the cane of a nineteenth-century aristocrat. The fatal cut was quiet. Two men held the bird’s legs as it hung upside down over the deities, spilling its blood elegantly down the slope of its beak. When it was thrown to the ground, the bird valiantly lifted its head, swinging its neck in a weakening spiral.

The image of purity: emptied and sullied by its own blood.

Its white wool was dirty from the African dust. Two men unchained the animal from a tree and carried it upside down by its legs. It didn’t protest. After spilling its blood, it died quickly, landing on the ground with a heavy thunk.

After witnessing the slaughter of its neighbor (the sheep), the goat cried out in protest. As it was carried to the table, it screamed, swinging its head and shaking its legs to wriggle free from its captors. The grips of the men were too strong, and the stubborn goat kicked out its energy until it died.

The kitten hung in a bag on the branch stretching over my head. A man untied the bag from the tree and fished the kitten from the bag’s interior, holding the animal in the palm of one hand. It looked white, soft, and weak. The slice was gentle and the throw was high and light. The kitten landed on its stomach, meowing one last time before it died.

The dog sat patiently chained to a tree. Its fur was tan and black, like most Ghanaian mongrels, and had flies eating from the pink open wounds behind its ears. After its blood was poured and it was thrown to the ground, the animal refused to die. One man stepped behind it and snapped its neck before throwing it aside with the other dead animals. Still, the dog pulsed for several minutes: pained breaths pushing out its nose from its still-inflated lungs.

I gratefully accepted the schnapps that was passed among the villagers, desperate to numb the pain I witnessed from my picnic chair. The liquor, normally abrasive to my throat, went down with pleasant smoothness. Behind us, a bearded woman sang a beautiful melody in a language I did not understand. And then suddenly, as if on cue, the sky began to rain. 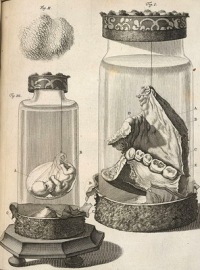